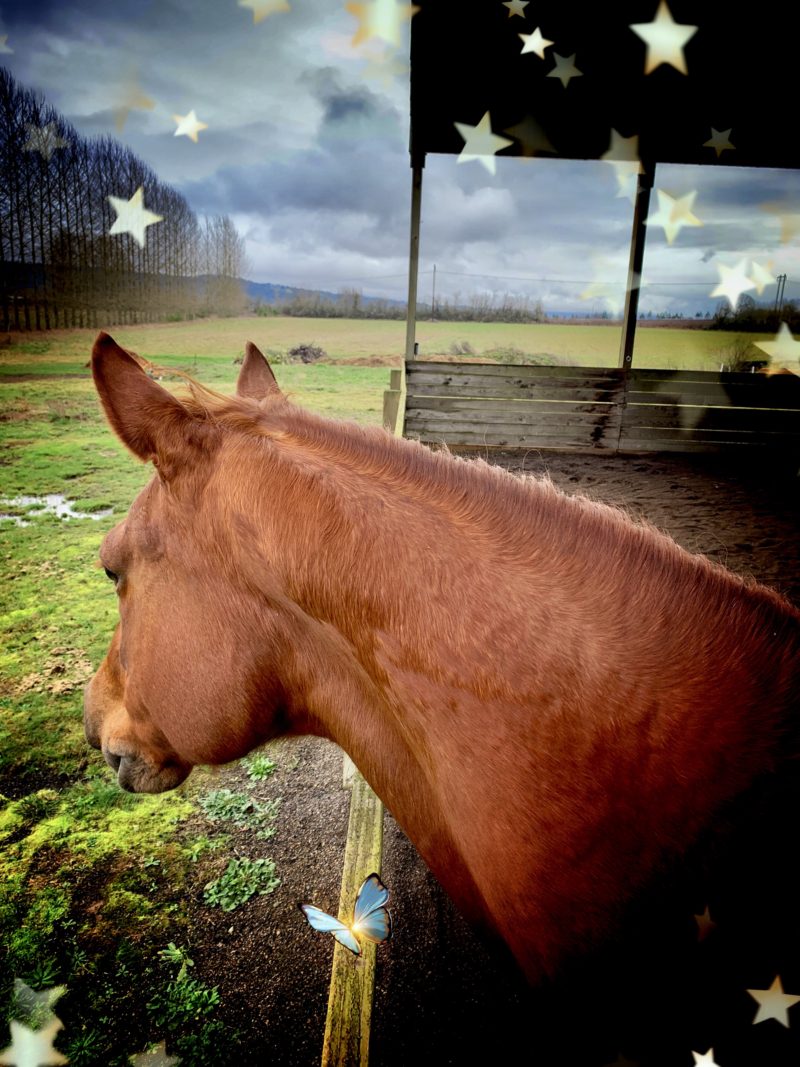 Well, what can I say about Daveena for this month? I’ve been trying to describe our evolution together and having trouble coming up with the words. Her development has been a slow burn. I can definitely say that. We’ve been together nearly two years. These last few weeks, things have definitely started to speed up.

Daveena’s development process this winter has really highlighted how a horse needs to MOVE. Duh right? I’ve known in my head that not only is my horse my recreation, I want to be my horse’s recreation too. I thought of that again the other day because, especially in winter when turnout is restricted to smaller spaces, there is a major opportunity to add value to our horses’ lives. This is great because I want my horse to see me coming and think: “Hooray she’s here!” instead of: “Oh crap, did she see me yet? How can I make sure she can’t catch me?”

Daveena is SO satisfying in that way. (Ha! Does anyone follow that hashtag?) Her eagerness to have me catch her lately is clear. Omgosh. What a great feeling. I would say her response to playing more on the ground has been the most dramatic of the 4 in my string. Actually, setting up little puzzles with obstacles has made perhaps the biggest change I can remember with ANY of my horses. Another helpful component is, although she definitely does need to move, she doesn’t need to move nearly as much as say a thoroughbred (or Willow!). It’s easily doable to direct her time and use her extra energy constructively so she feels better mentally, emotionally and physically.

I have said, a lot, that having a variety of body styles and spirit levels to play with is so valuable. It’s not only because it stretches our actual mechanical skills, but because it helps us to observe the common denominators as well as the differences. Like: Every horse needs to move. And: Every horse needs to move a different amount.  To me, getting clear on the common denominators has been a major part of being able to reliably shape horses’ behaviors in a way that enhances both their lifestyle and mine.

I can see clearly now that part of Daveena’s issue over let’s say the first 6 months of our relationship was that she didn’t understand she could feel better if she moved as I was directing her. Instead, she used to be frustrated because she had no belief in me and because really, she didn’t have a lot of skill or life to move in the way I was asking.

It’s been really interesting to observe her developing more self control over how she works out the kinks. Here’s where we get to the common denominators again:

In my lessons with Anne Gribbons last fall she kept saying: “There is nothing worse than a horse with a good idea.” Oh man. It makes me laugh to hear it in my head in her voice. She’s so awesome.

Seriously though, it’s a tricky concept that one could look at from difference angles and perhaps agree or disagree. For me, on one hand, I love it when a horse is thinking for themselves; understanding my idea and request, then moving their own body to accommodate it.

My horse DOES have to think for themselves because they’re the ones firing neurons to move muscle and bone in their own skin. Firing the neurons by definition comes from the mind. I absolutely want my horse to be mentally engaged and deciding how to move. Otherwise, they are just reacting which is not at all what interests me.

On the other hand, it IS a big miserable conflict to have a horse who thinks he’s directing the show. As Pat Parelli says all the time: Horses are natural followers and you need to be a leader.

I think Anne’s point is that it’s better for all parties involved if my horse understands I’m in charge of the Big Idea. I’m the captain, they are the crew. They are in charge of getting it to happen. Sometimes we can get into a bad habit of letting the Big Picture be the horses idea. This is especially easy to do if you and your horse are good friends. I’ve made this mistake a lot.

The main problem with this is that there are things naturally that affect a horse’s outlook on the big picture. If the horse is in charge, then naturally, he’s going to prioritize being suspicious and spooky about the things that freak him out.  Like, a scary aisle way vacuum for instance. Zorro was pretty stressed out about that sound for a while. It’s a totally legit concern for a horse when we stop to think about it right?

It’s much more peaceful for both the horse and the human if the relationship is always keeping the human in charge of the big picture. The horse might notice the vacuum cleaner and have a worried thought, but if he’s used to checking in with his human to see if we’re going to DO anything about that concern, it’s much easier to handle.

Because, if the horse is used to having his own ideas and plan then you have two issues at once: The Scary Vacuum Cleaner AND a battle for who should decide what to do about it. This is why we can get lulled into a false sense of security if we have a duller horse who’s not usually concerned about much. With those horses we can misunderstand how much we are operating on their good graces. At some point there will be something that concerns them and if they haven’t practiced how to move when their life comes up and if who’s in charge hasn’t been worked out ahead of time;  suddenly we’re in deep trouble.

This is the crux of the matter right? We have no choice but to be in charge of the Big Ideas because we’re the only ones who know stuff like aisle way vacuum cleaners are harmless. The horse has no way to know that ahead of time.

I’ve observed that horses are a lot happier when the human is in charge. Buck Brannaman is the king of demonstrating this. Over and over again, I’ve seen him take a horse who’s totally beside themselves and in a few minutes (or moments) when he puts the relationship between himself and the horse in balance, they not only let down and relax but they suddenly are super attached and affectionate towards him.

Part of the emotional struggle for me has been wanting to avoid creating a robot horse; a slave; an expressionless zombie. That’s not a partner! I really and truly would give up horses completely if that’s what the goal was. There’s no joy in that for me. For me, the exhilarating part, is when a horse understands my idea and is stoked to get it done. I freakin love that feeling!

Side note: This relationship has to be proven to the horse to be effective AND practiced in a lot of different environments. That’s one of the things I was missing before. (ie Lil at the Reno Parelli Celebration in 2008. Some of you were there!) Horses need exposure! Not just exposure though; exposure with the opportunity to practice the properly balanced relationship.

The art of giving a horse 49% of the responsibilities while keeping 51% for ourselves (and living up to that by paying attention!) is another one of those Fine Lines In Horsemanship. Those delicate Fine Lines make the Pursuit of Horsemanship a high difficulty endeavor. Omgosh though, when I get it right… that’s where the euphoria is. And, that’s what makes the Art transcendent and the Pursuit worth it.

This Big Picture-Captain/Crew , 51-49% balance is the part Daveena and I have got A LOT more organized and agreed upon recently. Sure enough, she’s gotten happier in herself and happier with me. I can tell because she’s more relaxed, more tuned in and much more content overall. Thanks to Daveena for helping me have a deeper understanding of some seriously cool stuff! Have I mentioned I’m getting excited?!

Ha! Well, look at that. I guess I found the words after all. (And I left out all the bio mechanic details!)😂😂😂

Thank you guys for reading! All the best to you and your ponies. Hope January 2020 is treating you well so far.

Make sure to visit www.wfwarmbloods.com to get on the waitlist for some extraordinary horses.