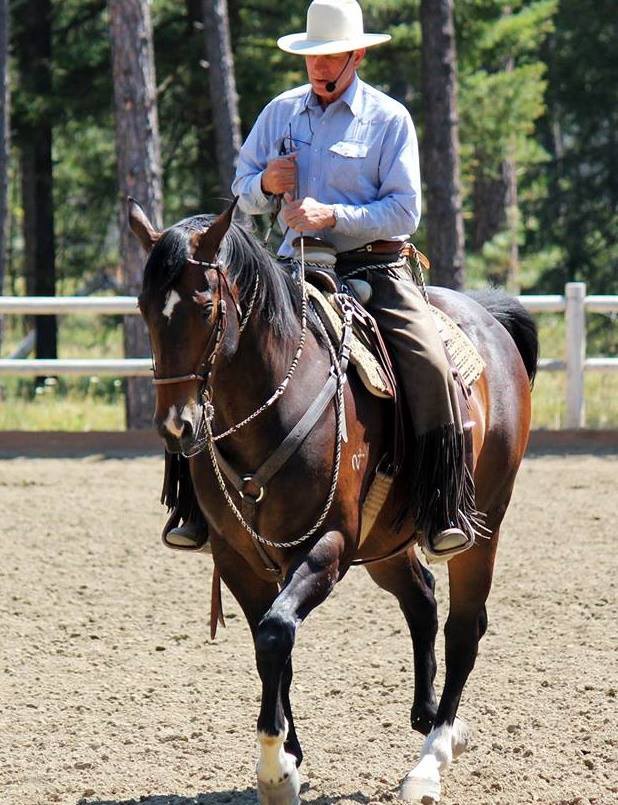 The first time I watched Buck ride it struck me how artfully he communicated with his horses. Of course he wasn’t using a mechanical marker like a clicker and he for sure wasn’t using food as a reward. Yet he was moving his horse towards the feel in a way that was beyond just pressure and release.

At one point Buck was talking about how extraordinary it was to be with a horse that was hunting the feel. He talked about giving the horse what it wants most in the world, PEACE.

I could feel the lines in my forehead getting deeper as I strained to see how he was utilizing the laws of science and behavior modification with an accuracy I have rarely seen. And sure enough, he was using a marker and a reward. His marker was the release and his reward was the Peace of Feeling Together.

Seems to me that it’s very important to note that this is not a “peacefulness” that comes from robbing the horse of his sense of security or taking away the little peace he, as a flight animal, is born with then giving it back to him. Its about adding a peace the horse didn’t have before. That’s when horse and human become more than what we were separately. So in fact, the release is a marker and not a reward.

A marker is a secondary reinforcer. It tells the horse “Yes! ?That was what I wanted!” A reward is something additional that you give the horse. Something they want. Something they didn’t have before. The marker and the reward need to be linked together so the horse understands the reward follows the marker.

This seems to be the critical difference between using avoidance behavior via pressure and release (do X and I’ll leave you alone) vs using pressure (as little as necessary)to give the horse information about where to start hunting the feel. The thing about leaving him alone is…that is what he had before I got there. I frankly just took away his comfort in order to have something to exchange back.

When I think about it, that’s pretty pitiful. I don’t want to have so little to offer my horse that I have to take away from him first. I want to Give to my horse. I want to bring something to the relationship. I think if we try to use the release of pressure as a marker and a reward simultaneously and don’t add anything, we are missing that magical quality all the special horsemen have been trying to describe throughout history.