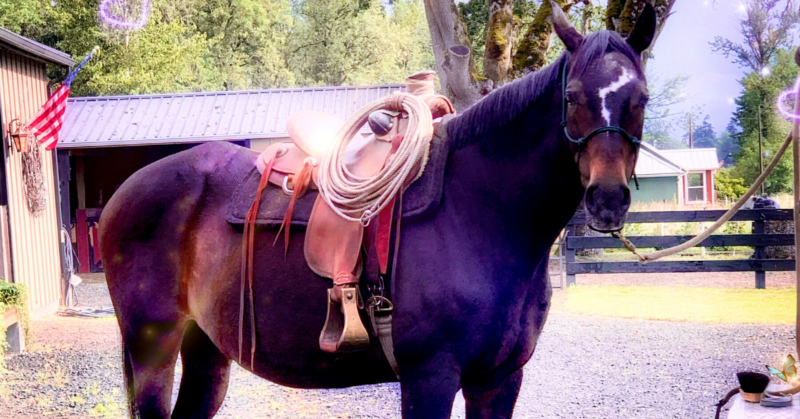 Willow rotated out of my string kind of passively at the end of 2017. She had gotten a minor stone bruise so I brought her home from the Northwood Campus to run around in the big pasture with the rest of the home gang.

I had recently expanded my Real Estate Business to include the Central Oregon Coast so it was easy to just enjoy watching her play and make sure I got to Daveena, Jax and Vivian. I was still riding Lil some too.

By the time Wilz healed up sound that winter, I realized she was 17 and a bit. It was probably a good time to retire her anyway. Looking back I can see that another reason she rotated out was I was a little stuck with her development plan.

For some reason I just wasn’t inspired to continue onto the hackamore stage of building a bridlehorse and although it would have been a relatively quick trip into the bridle from where we were, I just wasn’t feeling it. I guess that was my first indication that the allure of making “a million bridlehorses” might not be the whole picture for me.

It’s not that I was bored with her at all. And it’s not that I felt I’d completed her development in the snaffle bit although we could check off all the movements. I never could quite satisfy my desire to have her more relaxed and content.

It’s not easy to describe exactly what I mean by that. On some days Wilz was so mentally and emotionally secure I would, for the first time in years, be compelled to pull off the bridle and just enjoy the feeling of her being with me. 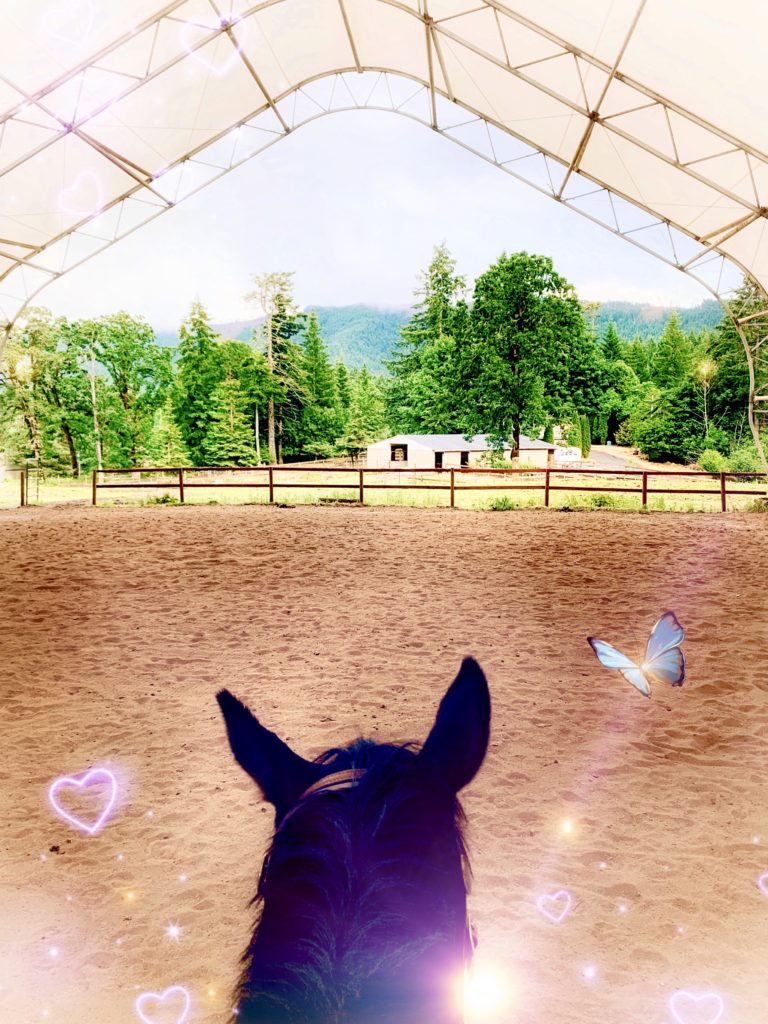 On the other hand, we had sticky points. Wilz is naturally both hot and ambitious. There were certain things I couldn’t get her 100% settled in. Our walk canters are a good example. She’s soooo incredibly sensitive and I was too sloppy. (In other words, I was too noisy.) She would determine that we were “doing those” and she’d try to get them done as soon as I twitched.

I would note there was a subtle difference between her just “anticipating” what she thought we were doing. Because she’s so sensitive, she legitimately thought I was signaling the transition.

When I tried to suggest to her that she was ok to take her time, I could never quite get her to feel ok about waiting. I think I now know the feeling in her body that back then that I couldn’t quite capture. Not only did I not have enough control over my own body, but I what I should have been feeling for was just too fuzzy. Whereas Vivian shows me, Willow needed me to show her.

Another related thing was my hit and miss ability to have her relaxed in changing environments. She’s naturally on the more strongly herd bound side and our partnership at the time couldn’t always overcome the combination of that plus her naturally spookyness.

In winter, January 2018, Kip and I were bringing in the horses together and I commented: “It’s such a bummer that by the time I’m good enough to take advantage of how talented Wilz is she’ll be way too old for me to do anything about it. Damn.”  Kip shrugged empathetically and said something like: “Nevermind. It’s all unfolding as it should.”

I had a hopeful feeling that someday I would be able to fit a horse like her but I knew, at the time, I was still out of my depth. Usually seeing the path ahead is exciting to me and my awareness of how far I have to go in my horsemanship is one of my favorite feelings. In the case of Willow though, it really was a bummer.

Wilz has been a happy retiree for the last three years. Not all horses like it, (Nigel for instance hated it with a passion so much he had to go to work for Teresa at Red Mountain Trails in order to be content) but she does. She’s a good herdmate and loves people so, her routine of out with the gang during the day and handled by us evening and morning suits her just fine.

Fast forward to about mid quarantine when I was down at Las Piedras with my current string at Nathan’s. I was in the thick of teaching Bonnie about the soft feel and how it applies to me helping her relax in a challenging environment.

I realized what I was doing to teach Bonnie was exactly the thing I’d needed to help Wilz. “Dang it all”, I thought. “This is exactly what I couldn’t put my finger on with Wilz. I just couldn’t feel it back then. Phooey! I wish she wasn’t so old.”

It’s funny how improvements in our horsemanship show up so gradually and unconsciously. I realized my ability to use the soft feel and movements constructively and with purpose, had leveled up. Plus, there is an actual response from my horse (I think in their hocks) I can feel and reward pretty reliably now.

I’m using it with Bonnie to show her how to find the homeostasis between relaxation and power.  I’m using it with Zorro to transfer his effort from his amazingly talented front legs to his underutilized hind legs. I’m using it with Daveena to dissolve the musclebound  brace she had against the reins and help her find a more consistently willing forward.

It’s so funny how that works. I had been using that uplevel in my style, timing and balance for a good while before I noticed it. It had just sneakily and quietly developed in me as a reliable skill over time.

When I got home, I started squinting when I looked at Wilz. “I wonder”, I thought to myself. “I wonder if she could come out of retirement for just a bit.”

Of course, at first, I didn’t give those momentary thoughts much credibility or energy. They were pretty ridiculous for so many reasons. Firstly, she’s 20!! Secondly, do I really have time for a 5th horse in my string right now??

But, as the days went by, my curiosity kept bugging me. And, Wilz wasn’t helping at all. She was kind of hanging around extra when I was out in the herd feeding or doing chores. She suddenly seemed to want extra scratches and extra pats. She chose to walk with me when the rest of the gang was heading to the barn.

Well, either my lack of discipline, my intuition or my curiosity has gotten to me; a combination of all I suppose. I still am not convinced. Maybe I shouldn’t even be writing about it yet. I certainly shouldn’t be publishing about it yet.

What if it doesn’t work and I’ve wasted time? What if everyone thinks I’m stupid or mean for asking a 20 year old to come back to work? What if she goes lame or we don’t make any progress after all?

You’d think those doubts would be enough to talk some sense into me. And yet, last week, I began. 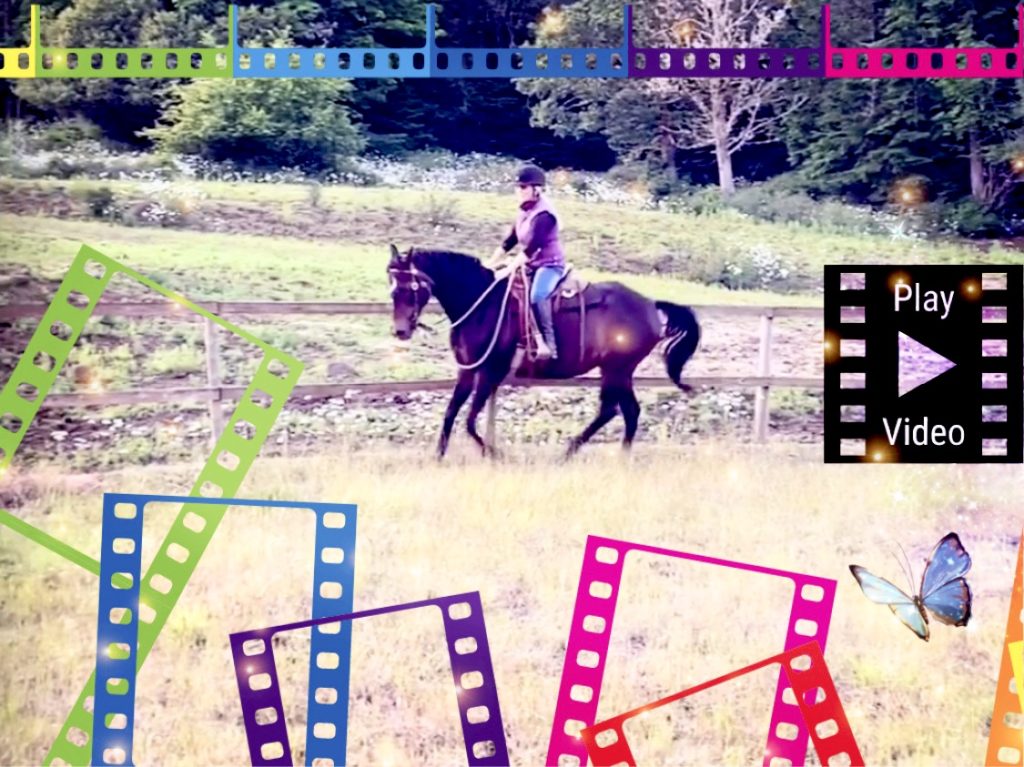 The first thing I did was take some body shots of her. She has a significant dip in her neck in front of her withers and a giant hay belly. She’s always had a hunter’s bump no matter how fit she’s been. I actually think she looks better in the pictures than she does in real life but the pictures will still show progress or not. I’m glad I got picts right away because sometimes just a week of constructive work will show up in a horse’s body.

The second thing I did was move her around in the rounpen at liberty so I could check her soundness. She looked out of shape but definitely sound enough.

The third thing I did was brush out her tail and trim her mane.

Then, I put her on the schedule.

She feels good! She feels physically capable and quite interested and pleased to be doing something.

I can feel that we are starting right where we left off with the same walk canter challenges. I also think I really am consistently rewarding the thing I noticed with Bonnie AND it IS helping her to find a new level of relaxation in power. I think…

The other thing I would note for the record is the friend factor. I’m not exactly sure how to describe it. Maybe one of you guys has a good way to verbalize it. It’s really jumping out at me. All I can say right now is that she feels very sure that I’m an ally.

So here I am in a sort of humorous disbelief that I have dug my 20 year old Oldenburg (classic RBE) out of retirement to see what else there is to learn.

Crazy or not, here we come.

Hope you guys are set to have a wonderful weekend.