These pictures make me smile. I’m always relieved to see that’s some of what Buck has taught me is sticking. Whew! If you’re coming from Insta tap here. 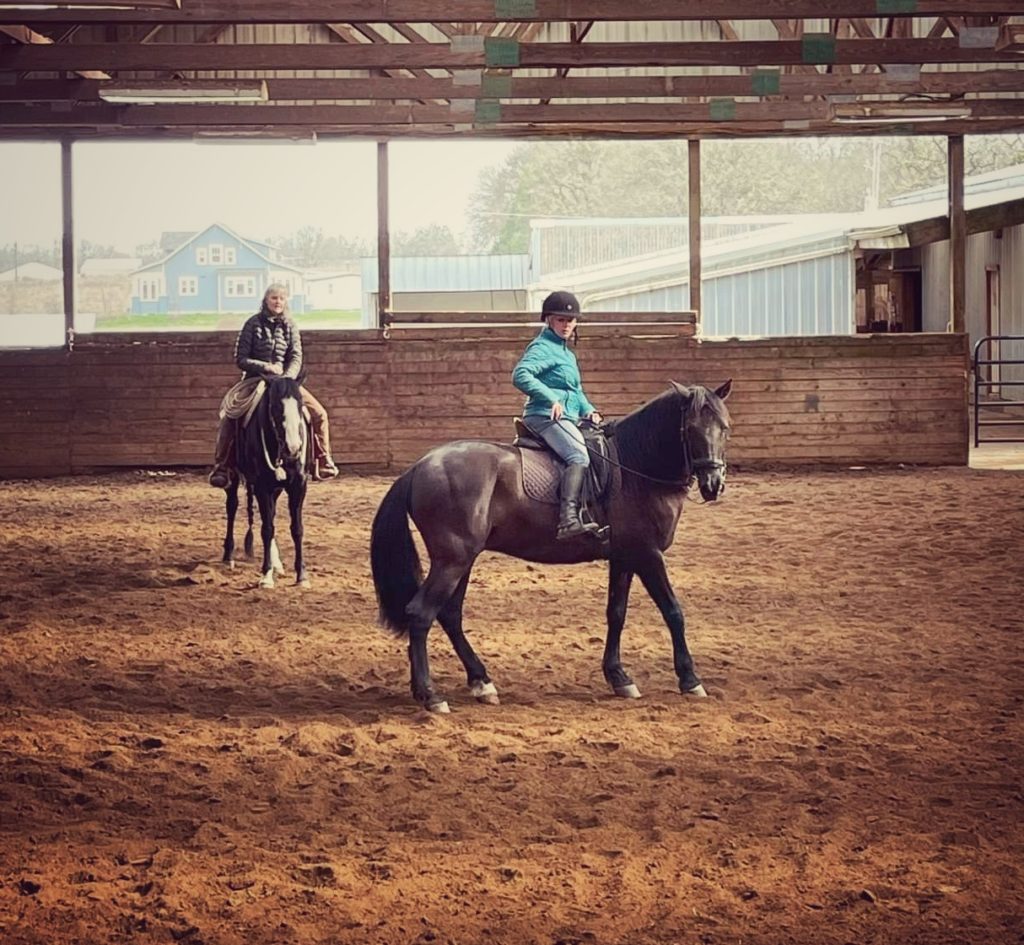 Also, I wanted to note yesterday’s ride for my diary.

It was a gorgeous pre spring day so Zorro and I spent our session outdoors in the dressage court @northwoofarms I’ve been traveling for the last few weeks and before that he and I had been traveling together to teach the Mastermind Class and host the pony party.

It was so nice to have a quiet day to soak up the sun. #soulfood

We warmed up nice and soft (me being in full chill mode) and he felt round and energetic.

As some of you guys know, I’ve been redoing some of his cues. He was really well trained when I got him but in some ways, that has presented more of a challenge. When we started, he’d automatically get to “doing stuff” without feeling for me first. I have often commented that if I ever get half of the heart Vivian gives me, we’ll really start to go somewhere!

Well, we’re on the right track! Maybe I have 30%. This is manifesting in a few obvious ways: His mouth is significantly quieter all the time. That’s been happening for a while. Another big one I noticed yesterday was his Lower back REALLY connected to my lower back.

I don’t know if I’ve noticed this so starkly before on any of my horses. The lightbulb came about towards the end of our ride when we were getting to a little passage. It felt really good! I was like “Hey look! I can sit this!”

Not only that but, we were able to pull off some longer and shorter within the gait because his rectangle was really connected to my seat. (This is definitely new for us.) The short walk we’d done before was clutch.

After a bit of a free rein walk break, I wondered if he’d be willing to do some piaffe. (His least favorite thing and one of my biggest weaknesses in terms of feeling the right moment to reward.)

As I suspected, he was willing to give it a shot. The challenge with his piaffe is it is soooooo flat. It feels like it’s rooted to the ground. Blech! Super cute and a good feeling that he knows it and was amicable to the idea but compared to the passage we’d just come from, it was pretty barfy.

Ok…so then everything started to fall apart. It’s like he switched from “our menu” to his original menu. Now, it’s not like his old menu is scary or bad. It’s very impressive actually. BUT, it’s not what I’m really hunting for. When we went forwards into passage, it had completely changed.
I was like oh no! Then, I was like oh boy!

Suddenly I had a whole bunch more data to compare. First of all I realized half the biomechanics of the passage were not even the same. I hadn’t been able to tell that before because I didn’t have the new passage to compare it to.

He’s sooo fancy and talented with his front legs, he can do a lot of impressive things with him. Now though, I could feel clear as day how it felt like everything from where I sit backwards was out of the picture.

I’m serious though, the only reason I could feel that was because the engagement a few minutes prior was so dramatic.

Even cooler than the data or the better passage came next. I tried to ask him to just go forward. At first just by moving the rectangle, then by using my legs. Yikes. That just caused him to put more effort into what he was already doing.

Of course, the first thing I did was pet him and try to communicate that I appreciated his effort without rewarding the quality itself. Sometimes that’s tricky!

The next thing I did was go sideways. I figured at least that would get us out of the hole we were in. It worked! He started to flip back to “our menu” of quality and I made a huge rewarding fuss out of it.

He got it. We were able to switch back to the right and get the same longer and shorter with almost all of the good stuff from the left.

Thank god I had the sense to quit immediately and ride out of the arena. For heaven’s sakes, sometimes that’s still hard for me. I always feel like I deserve a parade when I manage to make that decision.

So this morning I just wanted to take a minute to groove the ride into my mind. The comparison between the two completely different passages + the awesome feeling of communicating to my amazingly amicable horse, which one I’d like to do more of.

It’s my favorite… time with my horse that sets my “mind on fire”.

Hope you guys are enjoying your ponies too!