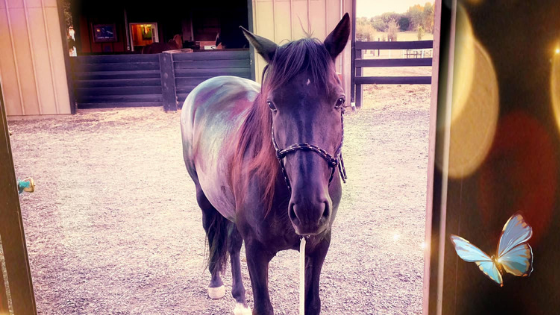 So…the official ambassadors of fall in western Oregon have arrived. The BIG rain storms are here in full force. Yesterday, we had actual stadium bright lighting and properly loud thunder. Yikes! Today I have a bit of a story to tell you… Tomorrow is a big day for me. Really Big. Like HUGE.

I get to ride with Anne Gribbons! I frankly, still cannot believe it. It’s hard to describe how excited I am. (I’m appropriately scared too of course but the thrill of getting to have someone I admire so much as my eyes on the ground is a very effective antidote.)

Here’s how it happened:

In the summer of 2017 after studying with Buck for 6 years and making 3 bridlehorses, I suddenly felt like it was time to peek back into official dressage land. It’s where I came from and upper level dressage is my version of seeing what I can get a horse interested to do without trouble.

It had been almost exactly 7 years since I was at Linda Parelli’s Game of Contact course in Pagosa and I hadn’t been to any dressage specific event since that time. As some of you know, once I saw Buck ride Rebel I knew I wanted him to be my teacher always and I had to focus 100% on studying his curriculum.

My horse Vivian actually had a big part in causing me to look up because although she was still a snaffle bit horse at that time, she could easily do so much and was offering some seriously fancy stuff! I’d started to feel frustrated that I couldn’t look ahead farther into her education. For the first time in 6 years I started to think: I need help! I need an additional coach!

Sometimes, as I’m sure you guys have experienced, when I listen to my intuition in a timely manner, the appropriate door to opportunity swings wide open. It was a Sunday morning like this I think when I looked on the DevonWood calendar to find that Anne Gribbons was teaching less than an hour away just a few weeks from then.

I knew of Anne because she was Karen Rohlf’s dressage coach as a kid and not only do I love what Karen has created with Dressage Naturally with Karen Rohlf-Training, Clinics, Educational Material, the photo series of her OTTB Brave Tom is one of my favorite inspirations. I remembered that Anne was the one who coached Karen through his transformation.

So, on a July Tuesday in 2017, I quietly slipped into an auditor chair at Devonwood. Within 10 minutes I knew. It was like the first time I saw Buck on Rebel. Shivers ran up my spine and the relief of finding my next guide flooded over me.

Holy cow you guys, Anne is so great! I watched her coach mostly Pre Saint George and Grand Prix riders that day. She taught with a delightful practicality and clear love of not only the horse but the process of communicating complex ideas in a clear, friendly way to both the horse and rider.

It was so fun because, she’d be coaching I’d be shouting in my head: “Yes! Yes! That’s what I love too!”

Through the rest of 2017 I thought of Anne often and applied a bunch of what I’d learned in those two days as a layer on what I was doing developing Vivian and my new string of horses. In the summer of 2018 I luckily was in town when she was back at Devonwood and I got to audit her clinic again. That was when I decided that somehow I had to get to ride with her.

Last fall in Spanaway I was pretty complainy to Buck about being lost and we had a talk about me needing another quality set of eyes on the ground. I told him I was a bit afraid to have someone other than him coach me. Allowing someone else to tell you what to do while working with your horse is such an intimate thing.

When I told Buck all about Anne and that I would bet on her being the one, he was so nice to reassure me and agreed she sounded like she could be right on.

There were a bunch of hurdles to navigate and I had no idea how in the world it would all work out.

First of all, looking at it one way, I would be in WAY over my head. The girls that ride with Anne are no joke and I’d frankly never be caught up by the time I would have a chance to get a spot in their crowd. Also, I hadn’t ridden in a dressage saddle in 8 years and didn’t even have a horse educated enough to bring me to the table!

On the other hand, Anne was so nice and encouraging when we’d had a chance to visit. She asked what my background was and when she heard me mention Buck she said: “Oh! So your horses understand you!”

So, I had the requirements in my mind and I set my subconscious to work on them.

The reality was, I didn’t have the horse. I still felt like I needed to be at a certain level to ride into the arena with a coach like this. If I was studying with Anne once a week or even once a month, maybe it would be different but a few times a year seemed to require I come more prepared.

Although Vivian was there in a lot of ways, she is on the bridlehorse track and that’s really important to me. Muddying the water right now for her by switching gear somehow didn’t seem like the right thing to do. At some point, yes, but not quite yet.

Daveena is actually the perfect horse but she’s still in the snaffle bit stage and I have plenty of development to do with her before I’ll get to that lost feeling I have with Viv.

Well, 2019 marched on with some pretty bumpy spots. As you probably know, earlier this year, my family and I lost my little brother Olaf and for a while everything I did was on maintenance. Some days it was a struggle to just keep up with my Real Estate business and the horses I had. I missed both of Anne’s clinics this spring but I didn’t forget the dream for one second.

In August the opportunity I had kept my eyes and my heart out for arrived.

My friend Wendy brought her two PRE Andalusians to the Northwood Campus for a month. She offered for me to ride Zorro while she was away. I’d helped Wendy a few times a year with his development and was curious to see how he was progressing.

Within 4 rides I knew this horse could be my bridge. He and I already had a relationship, a lot of the fundamentals I want were in place and he is many years ahead of Daveena in his education. Zorro could get me riding with Anne NOW. And…as a matter of fact, she was coming to my neighborhood to teach in October. Additionally there just happened to be an amicable feeling between Zorro and me that hadn’t been there before.

To top it off, because Wendy was ready to move on to a new project, Zorro happened to be for sale.

One. Big. Problem: His price point was many tens of thousands of dollars out of my reach. Like…way too many.

Normally, I’m pretty good at going with the flow of the universe. Plus, I love riding the $1 horses. AND, I have a fancy expensive competition style dressage horse Wensleydale Farm, LLC in the making.

But, you guys, I cried. I cried for days because I knew this was my opportunity. And, I needed a sign. I needed something giving me the next clear direction.

I don’t even know how exactly to recount the events of the weeks that followed. I guess I’ll just say that I got my sign. A band of dream makers came together and pooled their resources and their votes to give me the nod of approval. Zorro is mine now. They made it happen. Can you believe that??

It’s good I think to celebrate the wonderful parts of life even if they are not especially relevant to anyone else. Remember the part in Peter Pan when Tinkerbell was dying and the kids had to bring her back to life by saying “I believe, I believe, it’s silly but I believe.” ? Sometimes, on this horsemanship journey, I feel like that.

Magic is magic and I don’t want to ever take it for granted. It’s been such a humbling experience to be kind of laid bare by accepting such generosity and knowing all I have available to contribute is the knowledge I’ve gathered in my head and my sincere pledge to do my very best.

Thank you to Wendy Lee Dinnerstein, Nathan Greiner, Dave Margulies, Wanda Daily and Gerald Daily (Mom and Dad). ⚡️❤️(You guys know how I feel because you know I was speechless for days! Ha! Who knew gratitude and awe could accomplish such a feat?)

So, here we are. October 20th 2019. In a few hours, I’ll be taking Zorro to River Run Equestrian Training Center to put a quick ride on and get him tucked in for the night. We’re about as prepared as I could have dreamed we’d be in 6 weeks and 28 rides. I even feel pretty good in my newly gifted dressage saddle although I cannot really sit the passage worth a darn in it yet.

Tomorrow, I’ll be way over my head and generally quite far behind but we’re just barely ready enough to get started and I still can’t believe I’ll have THE Anne Gribbons to have a look and give me some homework for the winter. Thank you to Sarah Gammie for getting me signed up last minute.

(Also, I have to confess that I secretly love being the rookie. As I said, I am sufficiently, respectfully scared. BUT, it’s not quite as scary or intimidating as starting a colt at Buck’s that first year with all those handy guys and gals. However, I still have the voice in the back of my head saying: “I hope we don’t die!”)

I remember cleaning stalls for a week when I was a kid to pay for a single riding lesson and I am definitely having doubts about being worthy of two $400 riding lessons but I know nearly for sure that Anne Gribbons is the exact right choice and duh, what did I expect trying to find someone to go after Buck?

Speaking of Buck, we’ll have one night home at the Northwood Campus after this clinic and then we’re off to Spanaway to ride with him for a week. Somehow that’s helping me feel safe.

I mentioned I feel grateful right?

Thanks to all of you that read this whole thing. (Nearly 2,000 words!) I appreciate you taking the time to share in my excitement. ?Xoxo?

Ps. I’ll add a link to Anne teaching in the comments. I didn’t pick her for her resume but it’s extremely impressive. Previous qualifier for the LA Olympics, Technical Advisor for the US Team, International Grand Prix judge, USDF Hall of Fame, built a million GP Horses and taught a million GP riders. A quick google search will tell you much more. Her book “Collective Remarks” is a delightful read as well.