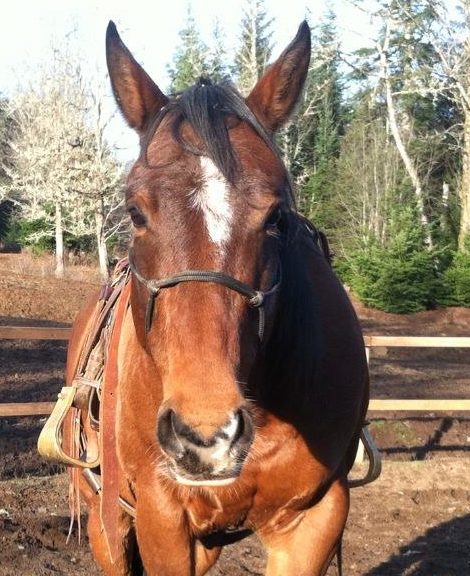 A few days ago I was sitting on one of my favorite horses chatting with my friend Beth who’d come to watch me ride for the day. It was really the first stormy day of fall. We had jackets on, leaves were swirling around and we were very grateful for the covered arena as the rain pounded down.

I had stopped in the middle of the arena, Beth and I were analyzing some canters when the horse suddenly and correctly rolled his jaw to the right, reached his right front foot, planted his left hind leg and began a really balanced forequarter yield. I thought, what the heck? Then I realized that the wind was blowing the reins across his neck. As I gave him a pat and took the slack out of the reins, he got parked, cocked a leg and sighed.

Beth and I both just shook our heads chuckling in disbelief. This horse continues to amaze us. I’ve been hedging about telling his whole story but it really is a good one so here goes…

Jax (aka Little Jax to differentiate him from our Big Jackson) is an 11 year old blood bay quarter horse who stands almost exactly 15 hands tall. His story with me started in December of 2013 when I stopped in a barn to look at a horse that I’d found on dreamhorse. Along with Kip and a dear sponsor of ours, I was searching for a horse to purchase and develop. I’d looked through hundreds of horses, made a lot of phone calls, sent a lot of emails and was now driving around to try out the very tiny list that I’d ended up with. (Probably many of you guys have been through this process. It’s pretty similar to what I do with my clients in real estate.)

So it was an October day similar to this two years ago when I arrived at a medium sized training and sale barn in the Portland area. The polite and professional trainer had the horse I’d called about all tacked up and to ready to ride…plus one more. The one more was Jax.

I rode the first horse for a few minutes, got off and then, since I was there and wanted to be polite in turn, I figured that I might as well try “one more”. A quick once over glance of this bay horse gave me the impression that he was pretty gentle so despite some pretty foreign gear, after I got off the first horse, I climbed the fence and swung a leg over.

The amount of information that comes streaming through your body the moment your butt hits the saddle is amazing. Ugh. He felt miserable. Obedient and steady on his feet but I could hardly hear for the wringing of his tail. I couldn’t say what his expression was exactly. His head was not really visible to me because it was pulled down below his knees by the reins that were running through a training fork hooked to his cinch, running through his front legs and attached to a twisted wire snaffle in his mouth.

The horse world obviously has many different methods but this one was not working for this horse.

As I headed off into trot I remember thinking, thank god this is a gentle quarter horse. I can’t believe this feels safe to people! There was no possibility of any proper lateral flexion and thusly no one rein stop if anything went wrong because anything with one rein would have pulled him right over on his side. Using two reins at the wrong moment could also be disastrous and take his front legs completely away from him.

In other words, there I was sitting on a horse I’d never seen go, hoping that it would all be alright because if he decided to melt down, there was not a dang thing I was going to be able to do about it. It’s not something I’d ever recommend and not something I usually do. The arena was not huge and the footing was good and for some reason the feeling I got from him was that he would be ok.

Well, he was lame. He was doing this weird little super slow jog with a definite limp in it. I’ll never forget the feeling from him about it. He was just doing it. It felt choiceless. Because of how slow his trot was, the thought occurred to me that he might just be rein lame. I gave him more slack, mentally crossed my heart and asked him to trot out a bit more. Sure enough, as soon as he reached his neck up and out a bit and he was going more forwards, the limp disappeared. I picked up the reins again to shorten the trot and the exaggerated limp was back. Yep. Rein lame. Interesting.

Side note on rein lameness: I’ve created that myself when I was teaching Nigel to passage. I started to reward one diagonal pair elevating just a little more than the other. I was just trying to capture the movement and give him the idea of what I wanted. It didn’t take more than a few times of that for Nige to be kind of lame feeling at trot. For my little lippizan though, it didn’t take but another few minutes to unlamify him by just capturing some elevation on the other diagonal and making sure to reward an even trot afterwards. So…I knew how it was created (for Jax my guess is that he developed it when the trainers were trying to get him to slow jogtrot) and that it was completely fixable.

However, the canter was an even hotter mess. Within seconds of him realizing I was asking him to canter he was in a full body sweat. Pouring sweat. Dripping little droplets into the sand. Again, he amazed me. Despite having almost no way to take off into the canter because his head was so low he was trying to do it anyway. He was stressed out because he clearly was on the edge of somersaulting forwards he rushed to keep himself upright. I was amazed that he wasn’t shaking his head or gnashing his teeth or refusing. The only active note of dissension was the angry swishing of his tail and the sweat pouring off his body.

After making it (barely) to each lead, I let him walk, said he was a nice minded horse and got off. I thanked the trainers for showing me the horses and drove off to continue my search. Neither horse was the one I was looking for.

Definitely not the bay horse. Waaay too much of a project. I dismissed him from my mind. Or so I thought….

Thanks for reading gang! Remember! I love to hear YOUR thoughts. So please write a comment, send me an email or a private message and feel free to share as you like.

Follow me for more and find me everywhere @emmadailykline. My best to you and your ponies!