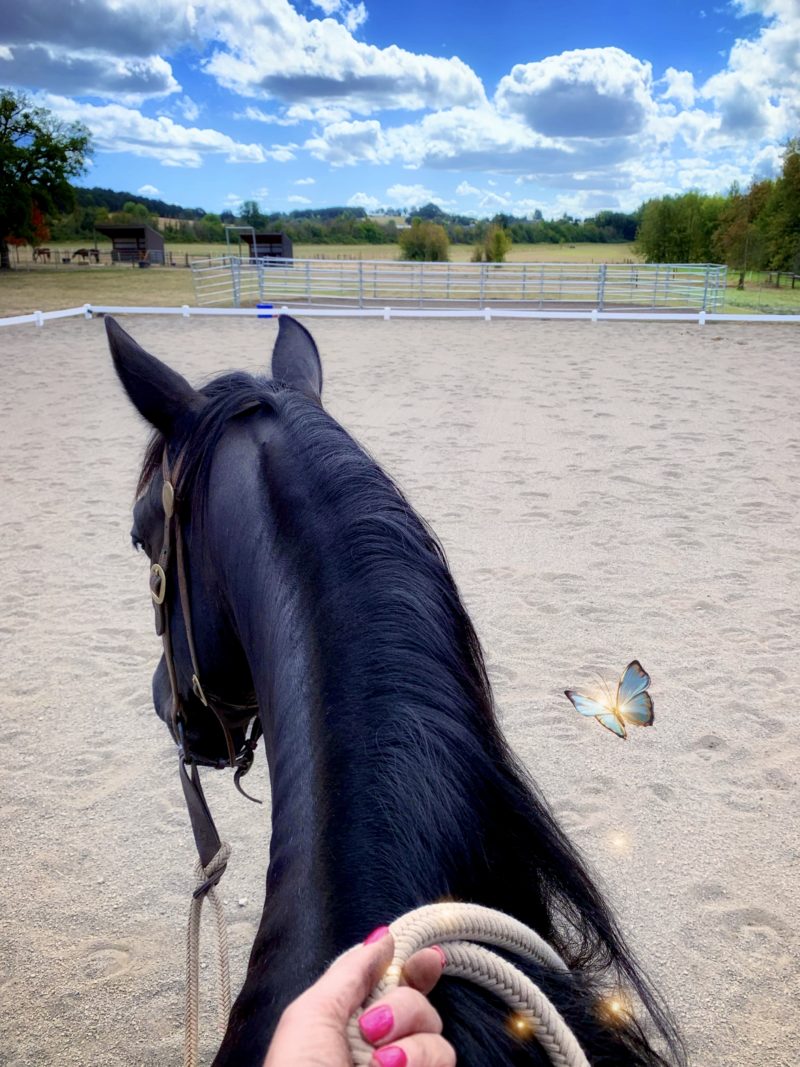 I still can’t believe he’s not going to be taken away from me. A Facebook memory came up the other day of him and me in Arizona in 2017. I think maybe the idea that we could be partners did cross my soul that for a moment that day.

I remember I was so proud we got that selfie!! Ha! He was still a stallion back then and it could be a little dicey to turn your back on him! (Here’s the link to a Vlog we did with him later that year right after he’d been gelded.)

His former owner and trainer, my good friend Wendy Dinnerstien, has said for years that Zorro needed his own person. I’ve been thinking about that lately. Horses really seem to know if they have a person or not. It makes me smile to think how things have changed between us already since I’ve been his. That’s been really obvious with Daveena too.

Zorro is getting pretty dang good at Vlogs now. I’m still impressed when he stands for them like a pussycat instead of a panther. 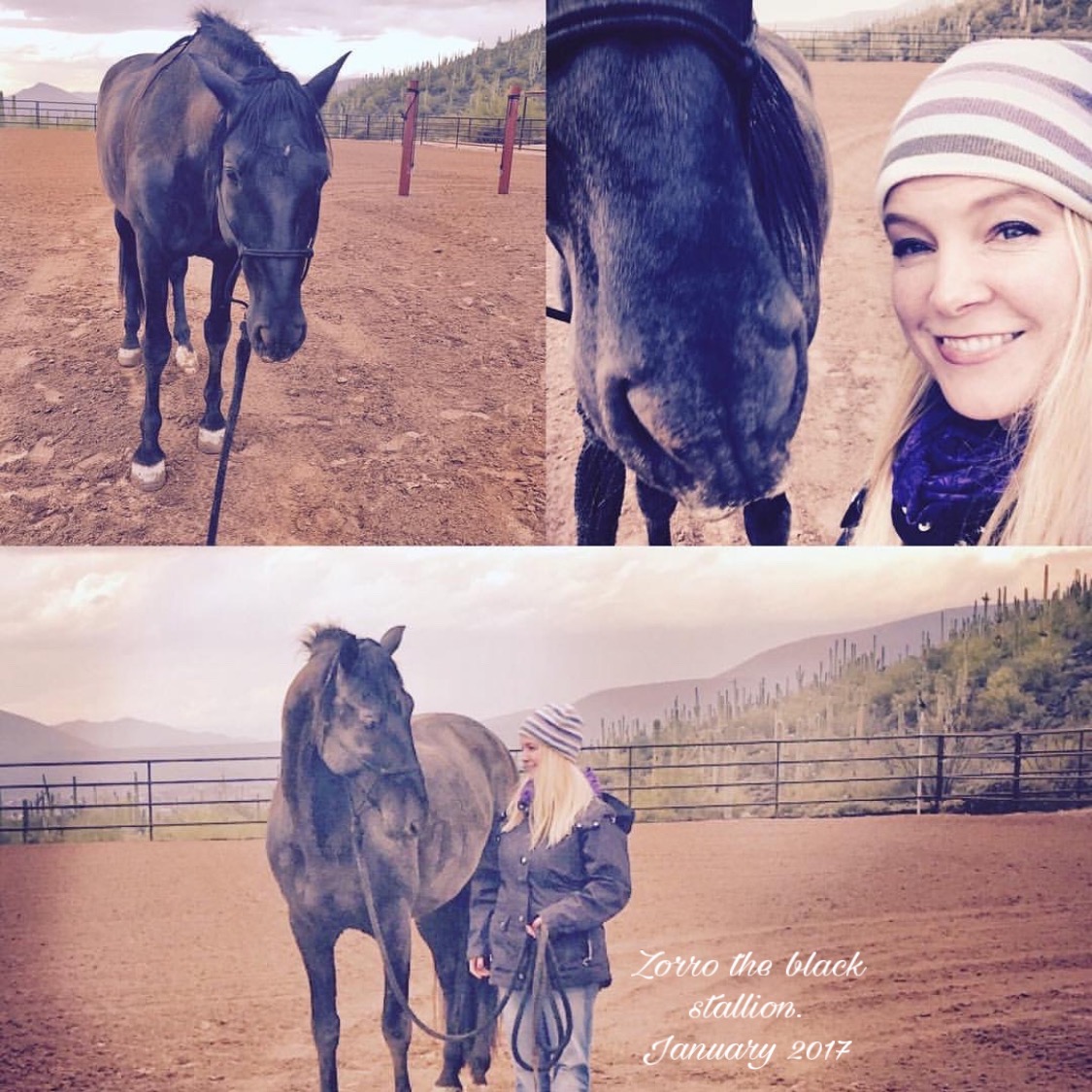 Iberian horses are SO COOL to develop! Smart smart smart! It’s not just that though. All of my horses impress me with their intelligence. I guess Iberians are just a different kind of smart. Like, they are bred to show off and do tricks so their mind goes there even without directing it.

The nitty gritty on his development:

Playing with him at Liberty has been the focus since I haven’t gotten to do much of it for ages and haven’t done anything with him until this year. He’s pretty stressed out about the string on the end of the carrot stick helicoptering around his head. To be fair, I did whack him in the face with the honda once when I was trying to accomplish the same thing by swinging a loop. So, we are doing a bit of repairing from that. But, also, he’s pretty sensitive to sound and he’s been naturally suspicious of that zipping sound. I love finding those gaps in his development! Low hanging fruit as my friend Dave would say.

Zorro and I have been doing all our Liberty in the indoor arena (120×75) because, A: We needed to up the level of difficulty and B: Our roundpen is outside anyway. The biggest hugest thing has been for him to get out onto the circle and maintain gait at canter. That’s made a massive change in him.

One thing I have kept him online for is stick to me. His go to thoughts are about passage and Spanish walk and I’ve also noticed he tends to be pretty distracted by the string. So, it’s just a matter of teaching him to hurry up and get around me as I turn left or right. It’s not that he wants to leave, he’s just not quite sure about where he’s supposed to be. I cannot wait to be able to have him prancing along at my side or on a small liberty circle. But…first things first.

I’ve been riding him in the wade saddle lately and I must note that one of the big differences between it and the dressage saddle, is how much less disruptive leaning over to pet him is. Anne kept scolding me for petting him in my lessons because it would upset his balance. She, of course, was right and I could see it clearly in the video. It’s definitely something I can get away with when I have the stability of the western saddle.

Maintain gait and direction is coming along! And, just generally being in front of the leg. It’s time to get some video for sure to see where we’re at. Making it to 4 laps each way at canter on cruise control was pretty rad.

A big highlight from this week was that there were seriously noticeable times where he was trotting along with a quiet mouth. I sat up there silently cheering my little heart out as we went along.

Overall, he’s still super noisy in the mouth. Some horses are just like that as they learn and luckily I have enough experience to know it’ll quiet itself over time. I loved to hear Anne mention it as well during our lessons. “The only thing is, he’s a bit noisy in the bridle. But, we don’t worry about that. It will just go away as he understands more.” Ha! That’s what Buck always says too!

Redoing our canter cue has been really the only big misunderstanding that’s come up in the switch between Wendy’s school of aids and mine. I put my inside leg forward and “sit on my outside butt cheek” as my original dressage coach Hans used to say. If the horse doesn’t go, I bump with both my legs (or kick if need be).

Zorro was taught that the inside leg meant collect collect. Oh boy did we have a few days of static between us as we completely had those signals crossed. We’d barely gotten to a semblance of understanding right before our Anne lessons. Still, in those, when Anne would say put your inside leg on, Zorro would hit the breaks, squash his body together, and when I put more leg on, he’d desperately drop into his most extravagant passage. Oh man. We were all a bit exasperated with that.

I respect Zorro so much for trying to do the right thing. And, I must say, I respect his previous training too because it was so clear and so consistent. He is one of the most obedient horses I’ve ever ridden. A testament to having a proper start to finish school of aids.

Zorro and I had done our best in the time we had together before the Anne Clinic, but really, he was banking on his old cue and eventually in the Anne lesson, I just stopped using my inside leg for forward and relied soley on behavior capture.

A note about that: For me, the inside leg to collect just doesn’t work out because my legs have GOT to mean forward. I don’t want to have to carry a whip (not because I’m morally opposed but just for the sake of having both hands free to swing a rope or carry a flag or whatever). So, if I don’t have the whip to remind my horse to go forward, my legs must be able to add more throttle.

It was at the Buck clinic in Spanaway a few days after Anne that we had the big breakthrough on forward.

One of the mega benefits of riding in a crowded clinic is the ability to prove to my horse that I can get him out of traffic. “Listen Zorro, I know where the quiet parts in the arena are and if you just go where I say (and sometimes hurry to get there) you’ll get right to the peaceful spot.”

I felt the moment he “got it”. The pressure from all the other horses helped because he didn’t want to hit the breaks and do nothing. So, he went forward through the gap I had pointed him through and I could feel him go: “Ooooooh. I see. What a relief.” Ha. Pretty fun.

Overall, I feel happy about how we’re coming along together. I can see how the progress is going to add up in a few months. And, I’m feeling ready to put that dressage saddle back on pretty soon! #abs !

I hope you all are enjoying the beginning of the year. As usual, it seems to be going by fast! Thank goodness my January tracking calendar indicates I have something to show for it. We’ll see!

All my best to you and your horses.  ?Emma